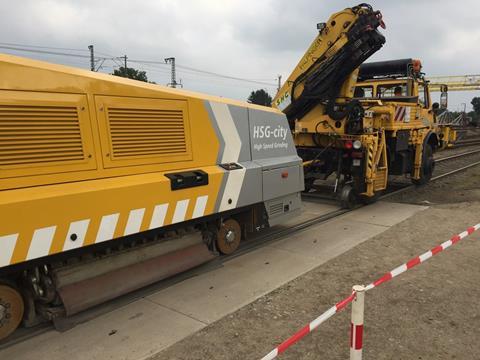 GERMANY: Vossloh Rail Systems’ HSG-city high speed grinding unit is to be trialled on the national rail network later this year in conjunction with the i-Lena noise reduction research project.

Originally conceived as a way of maintaining metro and light rail tracks through regular preventive grinding, the unpowered HSG-city is towed by a maintenance vehicle. It has been deployed by several urban operators, having been authorised under the BOStrab regulations in 2015. Studies have shown that the diagonal grinding pattern helps to prevent damage to both wheel and rail, while the regular treatment of the rail surface inhibits the formation of corrugation.

HSG-city has now been approved by the Federal Railway Office for operation on main line and suburban railways, designated as a ‘heavy ancillary vehicle’ capable of operation at up 60 km/h. Vossloh Rail Systems is also seeking approval for the unit to be used for maintaining ‘specially monitored track’ as part of a national strategy to reduce rail noise. A series of qualification tests will be undertaken through the i-Lena project supported by the Federal Ministry of Transport & Digital Infrastructure.

Large high speed grinding units are already being deployed on the national network, and the ministry’s Schall 03 guidelines recommend preventive grinding as an effective method of sustainable noise reduction. Vossloh Rail Services points out that the smaller HSG-city is easy to transport between worksites by road, allowing a faster and more targeted deployment than the large machines.

‘HSG-city was conceived for metro and suburban railways, but this latest approval allows us to increase its use, particularly on inter-urban networks’ said Managing Director, Marcel Taubert. ‘We view the EBA approval as a mark of quality that will attract international attention.'