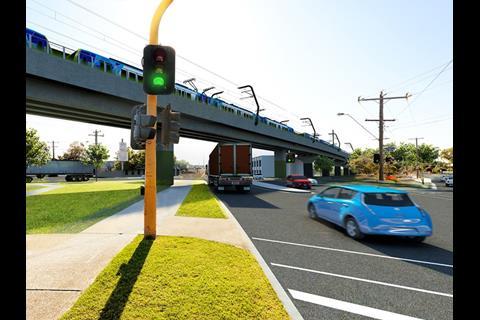 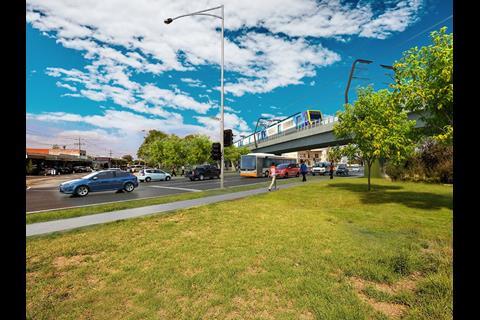 AUSTRALIA: A 2·7 km section of the Cranbourne – Pakenham suburban line in southeast Melbourne is to be rebuilt on an elevated alignment under a A$1·6bn contract announced by Victoria state Premier Daniel Andrews on February 9.

Upgrading of the busy line serving the Dandenong region is part of a programme to increase capacity, which includes the purchase of 37 EMUs under the High Capacity Metro Trains PPP. The civil works package includes the lengthening of 30 platforms, as well as signalling renewals to reduce headways and power supply enhancement for the entire route between Flinders Street and Pakenham.

The grade-separated alignment will eliminate nine busy level crossings, including some where the gates are reported to be closed to road traffic for up to 87 min in the 2 h peak period. The work will include the rebuilding of five stations, at Carnegie, Murrumbeena, Hughesdale, Clayton and Noble Park.

The Level Crossing Removal Authority has awarded the contract to a consortium of Aurecon, Lend Lease, CPB Contractors, and WSP Parsons Brinkerhoff. Aurecon will act as principal design engineer, having previously been appointed to undertake a similar role in other Melbourne level crossing projects. CPB was formed by the merger of Thiess and Leighton Contractors, and is part of the CIMIC Group which acquired Leighton Holdings in April 2015. Construction is due to start in June 2016, with the work to be completed by mid-2018.

Unlike other recent level crossing removal schemes which involve the railway being lowered into a cutting, the Cranborne – Pakenham scheme will adopt an elevated alignment. Andrews explained that this could be built above the existing tracks, allowing road and rail traffic to continue with minimum disruption during the construction period.

Public Transport Minister Jacinta Allen added that the project would free up 225 000 m² of land at ground level which will become ‘community open space’, which local residents could choose to use as parks, playgrounds, sports facilities and car parking as appropriate. ‘This tired and ugly rail corridor will become one of Melbourne’s largest community open spaces’, said Andrews.