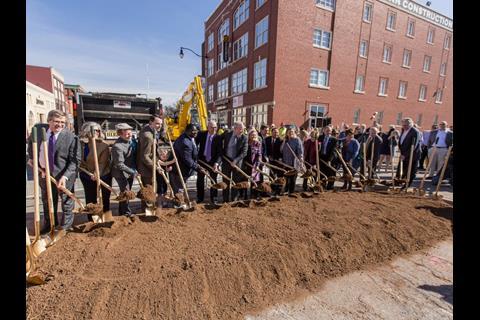 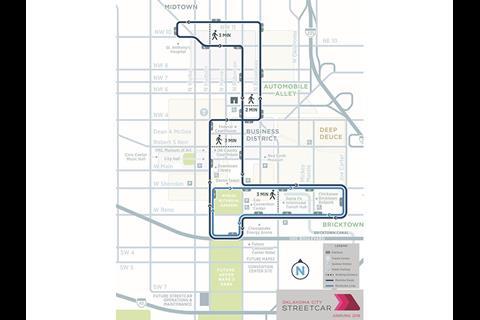 A joint venture of Herzog and Stacy & Witbeck is building the line, with ADG, Jacobs Engineering, Aecom and SOJ providing consultancy services.

Opening is scheduled for December 2018. The main route would consist of a figure-of-eight linking Bricktown with Midtown. Mainline Route services are envisaged to run in one direction around this 7·5 route-km loop, supplemented by a 3·2 km Bricktown Loop that overlaps with part of the Mainline Route at the southern end. There would be 22 stops in total, including nine shared between the two routes.

Brookville Equipment Corp is supplying five low-floor trams, the first of which is due to arrive in October. These will run in mixed traffic, and will be equipped with batteries for off-wire operation, which will be required on parts of the route. A maintenance depot is being built at SW 7th Street and Hudson Avenue. Regional transport authority Embark is negotiating an operations contract with Herzog Transit Services.

The project budget is $131m, funded through the proceeds of a 1% sales tax under the MAPS 3 capital improvement programme.

‘The MAPS 3 OKC Streetcar is one of the most ambitious projects in Oklahoma City’s history, and it will forever transform the way we live, shop, work, play, eat and get around downtown and the surrounding districts’, said Cornett.