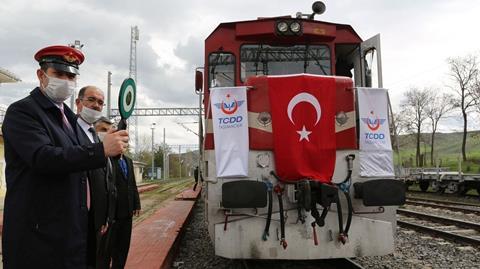 TURKEY: The Samsun – Kalin section of the line from the Black Sea city of Samsun to Sivas in central Anatolia was reopened for freight operations on May 4, following a five-year closure by infrastructure manager TCDD while major renovation and modernisation works were undertaken.

A date for the resumption of passenger services is not expected to be confirmed before the lifting of restrictions on travel in and out of the areas of Turkey which have been worst affected by the ongoing Covid-19 pandemic. 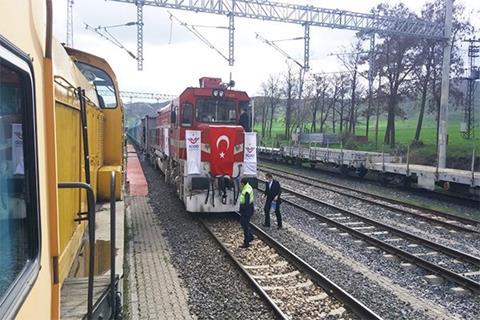 An inaugural 29 wagon train to collect 554 tonnes of bricks and steel sheeting from Turhal and Samsun was dispatched from Kalin by the Governor of Sivas, Salih Ayhan. Photos: TCDD Taşimacilk

Work to modernise and electrify the 378 km line began in June 2015, using a grant of €240m from the European Union’s IPA Transport Operational Programme to cover 85% of the cost.

Construction was undertaken by a consortium of Çelikler Group, Gülermak Heavy Industries and Czech firm AŽD Praha, which had a €27m share of the contract covering the supply, installation and testing of signalling systems.

TCDD is also constructing a 550 000 m2 logistics centre at Sivas.