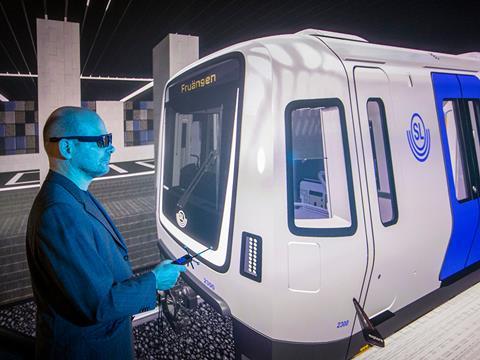 BOMBARDIER: Rather than exhibiting its latest vehicles on the outdoor tracks at InnoTrans 2016, Bombardier is focusing on a ‘highly interactive’ indoor stand, where visitors will be able to take ‘an immersive journey’ using virtual reality to explore the company’s latest vehicle technologies. A highlight of these virtual tours will be the Movia C30 metro trainset for Stockholm, which is currently in development but has not yet been rolled out. While the Crossrail Aventra trains for London and the Queensland NGR EMUs for Brisbane have reached their respective test tracks, the company felt that taking production trainsets to Berlin would disrupt the tight delivery and commissioning schedules.

Other products to be featured virtually include the next generation of Hamburg S-Bahn trains now taking shape at Hennigsdorf, the Omneo regional trainsets being supplied to France and the Traxx AC3 multi-system locomotives which have recently been supplied to LTE and Akiem. Bombardier will also be promoting its major subsystems such as the Flexx bogie family and Mitrac propulsion equipment.

Under the slogan ‘Building the Future Together’, Bombardier plans to group its exhibits around three main themes: innovation, partnership and solutions. While rolling stock manufacturing remains a core business, Bombardier is keen to emphasise its growing role in the services market through the FlexCare maintenance management package. Another key focus will be digitisation, and the use of advanced analytics and predictive modelling. Among the new product launches will be a cyber security system and a broken balise cable detector.