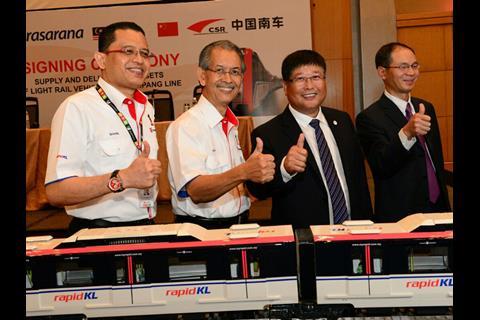 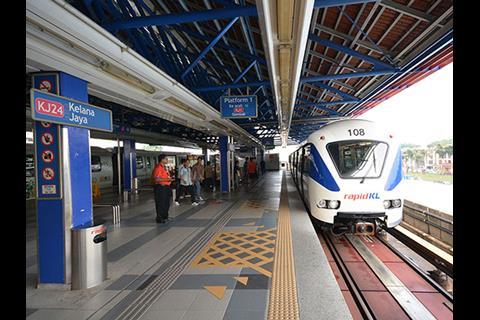 Scheduled to be delivered between May and July 2015, these 30 trainsets worth 1·13bn yuan are in addition to 20 which were ordered in 2012 for delivery from November this year as part of the Ampang Line Extension project, the first section of which is scheduled to open in October 2015.

When Prasarana ordered the Ampang Line Extension trainsets it had also planned to undertake a mid-life refurbishment of the existing fleet dating from the opening of the line in 1996. However, studies found that the older vehicles’ outdated technology meant it would be cheaper to exercise an option to order new vehicles instead, taking the total order to 50 trainsets.

Each of the 750 V DC third-rail trainsets will have a capacity of around 1 300 passengers, with real-time passenger information, LCD infotainment screens, larger wheelchair spaces, CCTV, emergency ventilation fans and fire and smoke detection systems. They will operate in supervised automatic operation mode with a maximum speed of 80 km/h.

‘The introduction of the new trains will undoubtedly enhance the traveling experience of our commuters’, said Prasarana Chairman Tan Sri Ismail Adam.

Meanwhile, the first refurbished trainset for the Kelana Jaya LRT automated light metro line has returned to traffic. The work undertaken at the RapidKL Kelana Jaya Line depot included fitting LED headlights, infotainment screens, new seats and split windows that will allow emergency ventilation. CCTV and dynamic route maps are also to be fitted ‘in the near future’. Bombardier has a contract to deliver 14 new four-car trainsets by the second quarter of 2016, and Prasarana is studying reforming 22 two-car trainsets as 11 four-car sets with walk-through interiors.