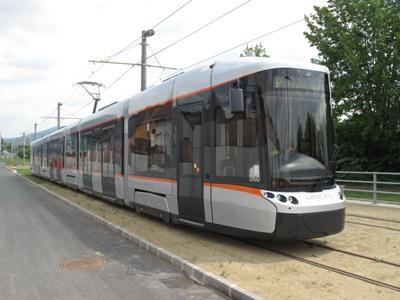 AUSTRIA: Celebrations were held on August 13 to mark the opening of a 5·3 km extension of Linz’s 900 mm gauge tram network.

Under construction since 2009 at a cost of €140m, the line running southwest to Leonding is the first to be built outside the city boundary and forms the first part of a route that is destined to reach Pasching and Traun by 2015. The line was built at the instigation of the Land of Niederösterreich, which covered 80% of the cost, with the town of Leonding contributing the other 20%.

Diverging from the main north-south route below Linz Hbf, the extension follows ÖBB’s main line towards Wels. The route is fully segregated, starting with a 1·3 km tunnel, which has a pair of single-track bores followed by a cut-and-cover section. Emerging from the tunnel, the route passes under the ÖBB main line to reach Kremstalstrasse which it follows to the terminus at Doblerholz. The extension has eight stops, and typical journey time from Hbf is around 12 min.

The branch is operated by Linz Linien as an extension of its existing Line 3 from Urfahr, replacing bus routes 14 and 15. This requires an additional seven trams in service each day, and Linz Linien is currently taking delivery of 23 additional Bombardier Cityrunner low-floor cars. Joining 33 Cityrunners delivered in 2008-11, the extra 40 m long cars will replace Linz’s 16 remaining Type M10 high-floor trams dating from 1984-88, in order to make the fleet fully-accessible by 2014. Up to 14 cars will be based at a new six-track depot in Leonding.