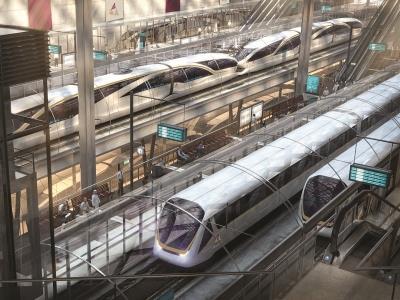 QATAR: Qatar Rail has selected contractors for the Red Line South and Green Line construction phases of the Doha metro.

The consortium selected for Red Line South is led by QDVC and also includes GS Engineering & Construction Corp, and Al Darwish Engineering. The contract covers the design and construction of six underground stations between Msheireb and New Doha International Airport, as well as the Red Line depot. Five tunnel boring machines will bore 13·8 km of twin tunnels at an average depth of 25 m for this section.

Meanwhile, the Green Line contract has been awarded to a consortium of Porr Bau, Saudi Binladin Group and Hamad Bin Khalid Contracting. This comprises the design and construction of the line between Msheireb and Al Rayyan Stadium in the west of the city, with eight intermediate stations. A 16·6 km twin tunnel will be bored at an average depth of 20 m.

The first phase of the Doha metro is planned to open by 2019. The Red and Green lines will be joined by the Blue and Gold lines, with two further construction phases augmenting the network in time for the FIFA World Cup, which Qatar is due to host in 2022.