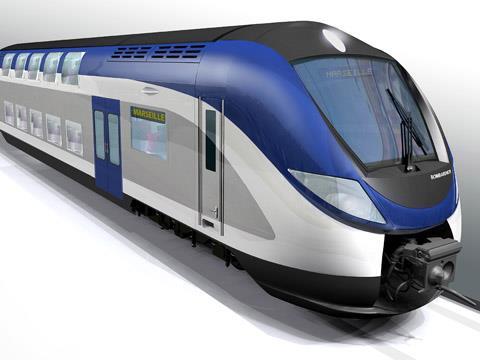 FRANCE: SNCF has signed the firm order for the first 80 Régio2N high-capacity double-deck electric multiple-units, Bombardier Transportation announced on February 24. The order was placed on behalf of the regions which are funding the units, and is the first within a framework agreement for up to 860 sets worth a total of €8bn.

The initial batch will be delivered to Aquitaine, Bretagne, Centre, Nord-Pas de Calais, Provence-Alpes-Côte d'Azur and Rhône-Alpes from June 2013 to December 2015.

Bombardier Transportation's Crespin plant developed a new double-deck train platform to bid for the contract. The company was named as the preferred bidder last November, a month after Alstom Transport signed a separate €7bn framework agreement to supply up to 1 000 single-deck Régiolis EMUs.

The modular design of the Régio2N allows for suburban, regional and inter-city options, and there are wide gangways over the articulations to create transparency and a sense of security. The design 'will become a reference product, and will support the regional rail transport development in our country', said Jean Bergé, President of Bombardier Transportation France.

The units will be built and tested at Crespin, which is a partner in the I-Trans rail industry research cluster.