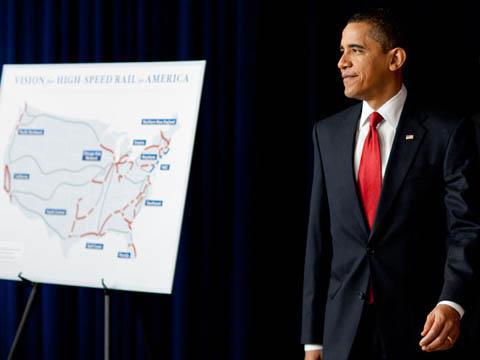 USA: An ambitious strategic programme to spend $13bn on 10 'high speed' rail corridors over five years was unveiled by President Barack Obama on April 16, as part of an initiative to reduce fuel consumption, pollution, traffic congestion and airport overcrowding.

The federal $787bn economic stimulus plan includes $8bn for inter-city rail, and Obama has proposed budgeting another $1bn annually for five years. He said revitalising the nation's passenger railways would be 'the most sweeping investment in our infrastructure since President Eisenhower began the interstate highway system in the 1950s.'

A competitive process has been launched under which states and local communities can put together plans for 160 km to 960 km corridors, which will compete for the federal funding. Detailed guidance will be released shortly, with the Federal Railroad Administration to award the first grants from late summer.

The plan identifies two types of projects. One would create new corridors for 'world-class high-speed rail like the kind found in Europe and Japan'. Another covers incremental speed improvements on existing lines. Development will advance along three funding tracks:

'Imagine whisking through towns at speeds over 100 miles an hour, walking only a few steps to public transportation, and ending up just blocks from your destination', said Obama. 'This is not some fanciful, pie-in-the-sky vision of the future. It is happening right now, it's been happening for decades. The problem is, it's been happening elsewhere, not here.'

The US definition of high speed is 145 km/h, and most of the projects would be no faster than 177 km/h (110 mile/h). The exceptions are California, where plans for 320 km/h or above are well advanced; Florida where a true high-speed plan was mothballed early in this decade; and along the Northeast Corridor where Amtrak's Acela service reaches 240 km/h.