UKRAINIAN Railways took delivery of two Desec TL 70UZ switch and crossing laying machines at the end of 2007. They have been supplied under UZ's second contract with the Finnish manufacturer, which followed an international tender backed by the European Bank for Reconstruction & Development. 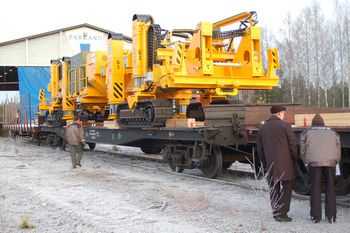 The Tracklayers will be used to remove turnouts without damage during ballast and subgrade renewals, saving money by allowing the original trackwork to be put back in place. Desec provided training in Finland for 12 UZ track specialists under the most recent contract, followed by a further two week course in Ukraine.

Desec Tracklayers have now been supplied to 15 countries, including Australia, Iraq, South Africa and Syria. The pair supplied to Ukraine under a EBRD funded contract in 2003 were used to change 300 turnouts across the country during 2007, up from 290 in 2006.