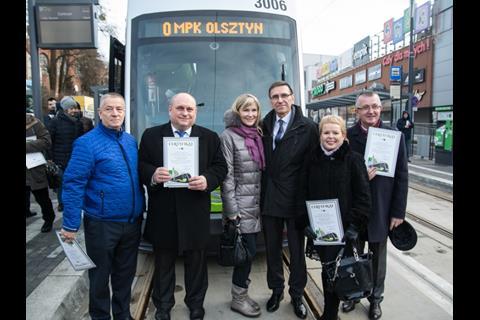 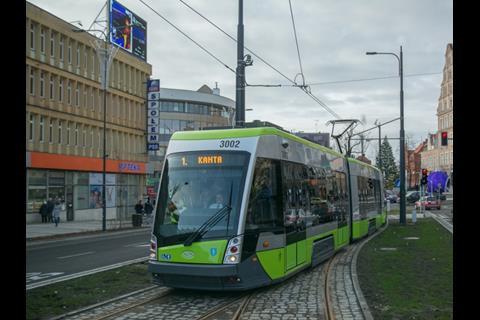 POLAND: The official inauguration of regular services on the Olsztyn tram network took place at 12.30 on December 19, with free travel until the end of the month. The first tram network opening since 1959 brings the number of Polish cities with trams to 15.

Olsztyn’s original metre gauge network closed in 1965. A feasibility study concluded in 2009 that the city’s transport problems could be solved by the reintroduction of trams to the city’s streets.

The new standard gauge network consists of a 7·5 km double-track corridor connecting the main railway station with Kanta in the Jaroty district in the south, with two branches: a 2 km single track line to Kortowo near Uniwersytet Warmińsko-Mazurski and a 600 m double-track branch to Wysoka Brama in the city centre.

Services are initially operating only on Route 1 between Wysoka Brama and Kanta. Route 2 connecting the main railway station with Kanta is due to begin operations on December 27. Route 3 between the railway station and Kortowo will follow on December 31. When all sections are open, the 11 km network will have 20 stops. Services are operated by city subsidiary MPK Olsztyn at initial frequencies of 15 to 20 min. Solaris has supplied 15 bidirectional Tramino S111O trams under a 120·6m złoty contract awarded in September 2012. The trams are 29·3 m long and 2 500 mm wide, making them the widest trams operating in Poland. The first car was officially presented to the city on June 19, with the last being delivered on October 5.

The original 249·8m złoty construction contract was signed with FCC Construcción in June 2011. Construction started in March 2012 and was due to be completed in mid-2014. However, the city authorities terminated the contract on August 9 2013, citing a lack of progress.

EU co-financing from the 2007-13 budget meant that the project had to be completed before the end of 2015. In order to meet the deadline, the project was retendered as five smaller lots: