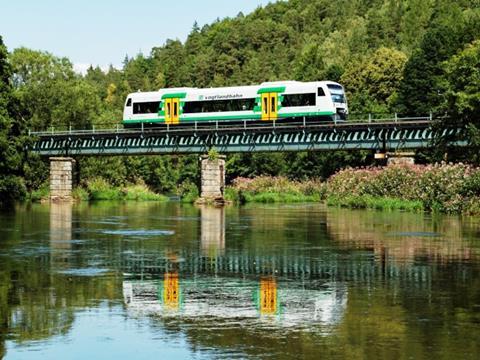 Closed to passenger traffic in 1945, the 7 km link between Selb-Plößberg and Aš restores a through route from Hof to Cheb. Revenue services are due to resume with the timetable change on December 13. Under a tendered contract from regional transport agency Bayrische Eisenbahngesellschaft which runs until 2023, Netinera subsidiary Die Länderbahn GmbH will operate a two-hourly service between Hof and Marktredwitz via Aš, Františkovy Lázně and Cheb. Connections will be provided at Cheb with trains to and from Karlovy Vary, Plzeň and Praha.

According to BEG CEO Johann Niggl, the project has been made possible ‘thanks to the joint commitment of BEG, the Bayern and Czech transport ministries and our partners in Karlovy Vary and Plzeň’. In order to meet the licensing conditions for operating in the two countries, ČD will ‘sub-lease’ the trains while they are on Czech territory.