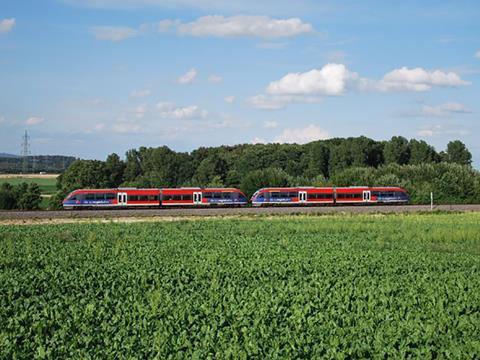 GERMANY: Transport authority Nahverkehr Rheinland announced on August 27 that incumbent DB Regio had submitted the most economically advantageous bid for the next contract to operate RB20 Euregiobahn services.

Radiating out from Aachen to Stolberg, Düren, Herzogenrath and Alsdorf in Germany and Heerlen in the Netherlands, the service carries around 15 600 passengers/day and totals 1·5 million train-km/year.

The operating contract will run for four years from December 2016, with an option for one-year extension. The relatively short duration and the use of the existing rolling stock reflects plans to electrify the cross-border section of the route during the contract term, with DB subsidiary Arriva Nederland scheduled to launch a Maastricht – Aachen service in March 2018.

Dutch infrastructure manager ProRail began track renewal works between Heerlen and the German border with a nine-day blockade starting on August 22, while design work is underway for electrification of the cross-border link between Landgraaf and Herzogenrath with completion envisaged by the end of 2017.