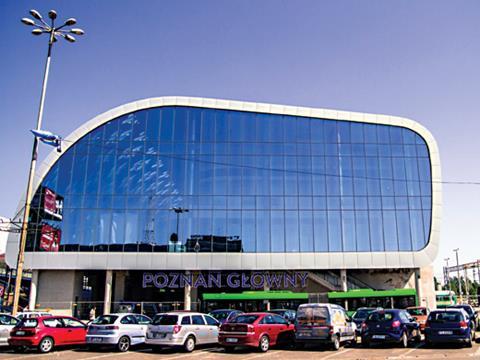 POLAND: A new main building at Poznan Glówny station was inaugurated by President Bronisaw Komorowski on May 29.

The €7m building partially spanning platforms 1, 2 and 3 has been developed under a PPP agreement between infrastructure manager PKP PLK which provided the land, and Europa Fund III and TriGranit Holding which provided capital and development expertise.

The 6000 m² structure forms the first phase of the 164000 m2 Poznan City Center development. An integrated transport hub and shopping centre to be completed by November 2013 will feature 250 retail units, a coach terminal with 19 platforms, cycle lanes and a 1500 space park and ride facility.

Under a planned third phase, the site of the existing station building would be redeveloped with conference, office and hotel facilities.

'In Poznan we can utilise our experience in transforming stations into new city centres we have gained at WestEnd City Center in Budapest and, currently at the initial stage, Emonika City Center in Ljubljana', said TriGranit CEO Árpád Török.