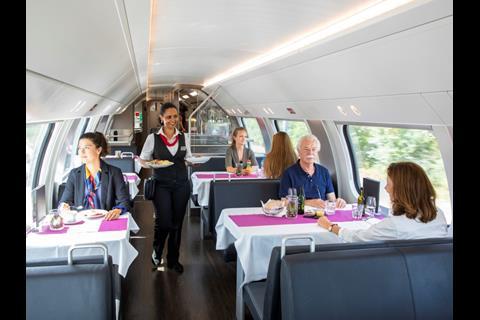 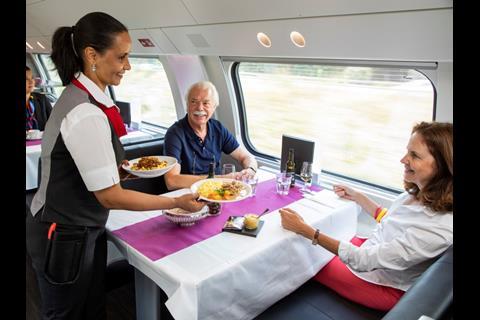 SBB believes that on train dining is ‘a trump card’ which gives rail a competitive advantage over other transport modes. ‘Well-prepared food while travelling through Switzerland is still a special part of the experience for our customers’, the operator explained.

Designated IC200, the 23 eight-car inter-city trainsets form part of SBB’s fleet of Bombardier Twindexx trainsets, along with 30 IR200 eight-car and nine IR100 four-car inter-regional units. The first Class RABDe 502 sets are expected to enter revenue service on route IC1 between Genève and St Gallen with effect from the December 9 timetable change. Each unit provides seats for 176 first and 401 standard class passengers as well as the 29 seats in the dining car.

Commissioning of the IC200s and the 29 single-deck Stadler Giruno high speed trains will increase SBB’s fleet of dining cars from 107 to 159 vehicles by 2021. This will enable the railway to provide a full restaurant service on every InterCity and EuroCity train.

Catering subsidiary Elvetino launched a new menu in April, which SBB says ‘has already proved its worth’. The full range is available on all InterCity and EuroCity dining cars between 06.30 and 21.00, offering ‘tried and tested Swiss classics’ as well as lighter snacks and drinks to eat in or take away. At seat dining is also offered in first class on some services.

Meanwhile, work began at Olten in July to refurbish five pre-series IC2000 coaches, as a precursor to a five-year mid-life refit of the entire 341-vehicle push-pull fleet that has formed the backbone of SBB’s inter-city operations over the past two decades. Expected to cost SFr300m, the refurbishment programme is due to be completed by 2024. Engineering design has been undertaken by Prose under a SFr8m contract awarded in 2016.