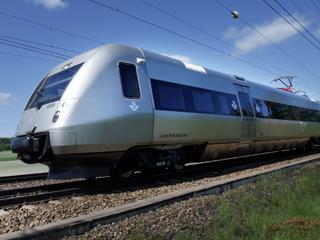 SWEDEN: Saying that the high number shows the success of deregulation of the rail market, infrastructure manager Trafikverket has announced that 46 applications have been made for train paths on the rail network in 2014. Of these, 27 are for passenger operators and 13 for freight, with the remainder being for maintenance and other works.

Amongst the applicants is MTR Corp's Swedish subsidiary MTR Nordic, which is seeking to operate on the popular Stockholm - Göteborg route alongside new applicant Citytåget i Sverige and incumbents SJ and Skandinaviska Jernbanor.

Trafikverket is now discussing the path applications with the various companies to see what can be accommodated on the routes. If there is insufficient capacity, the infrastructure manager says applications will be ranked to prioritise those offering the greatest economic benefit.

A draft version of the new timetable will be available from June 28, with the final timetable to be published on September 20 for introduction on December 15.