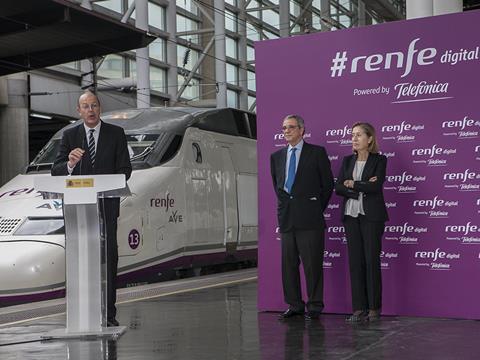 SPAIN: National operator RENFE is to equip 89 high speed trainsets as well as 20 suburban stations under the first phase of its wi-fi programme, Development Minister Ana Pastor announced on October 26.

Working with its technology partner Telefónica, over the past three months RENFE has been undertaking trials with a Class 100 high speed trainset to test onboard wi-fi equipment. In November work is to begin to equip the rest of the Class 100 fleet operating between Madrid and Sevilla, offering 3G and 4G to passengers via a Hispasat/Indra satellite connection able to accommodate over 400 users at one time.

From 2017, the successful bidder is due to start work to equip Class 102, 103 and 112 high speed trainsets, under a contract including operations and maintenance. Telefónica will be responsible for installing lineside telecommunications equipment.

Provision of wi-fi at 20 suburban stations is due to follow pilots at Getafe Centro in Madrid and Plaça de Catalunya in Barcelona. Passengers will be able to enjoy free access for 15 min every day.

According to Pastor, the wi-fi programme formed part of the government’s strategy to improve services for passengers both on trains and at stations. ‘I am convinced that it will help to modernise our public transport operator and differentiate its services from other modes, also enabling it to become more competitive and efficient’, she said.