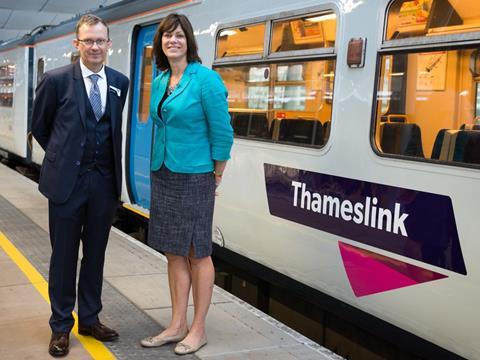 UK: Rail Minister Claire Perry joined senior executives and VIPs at The Shard, the landmark tower overlooking London Bridge station, on September 15 to mark the launch of Govia Thameslink Railway. The new franchise had taken over the operation of London's Thameslink and Great Northern routes from First Capital Connect the previous day.

Under a contract awarded in May, GTR will absorb some Southeastern services in December, followed by the Southern and Gatwick Express operations in July 2015 – these existing franchises are already being run by Govia. GTR will become the UK's largest franchise, handling around a third of all London commuter traffic, totalling 273 million passengers/year.

‘Putting passengers first is at the heart of DfT policy’, said Perry, suggesting that the combined franchise would ‘deliver a step-change on key routes and drive up customer satisfaction. We believe that GTR is best placed to work in partnership with the government. Our ambition is to meet and exceed customer expectations.’

The Govia joint venture of Go-Ahead and Keolis has been active in the UK for more than 16 years. Go-Ahead CEO David Brown said ‘I really do believe the new franchise will be transformational for passengers’, with three EMU fleets totalling around 1400 vehicles to be introduced by the end of 2018, as well as major infrastructure upgrading as part of the £6·5bn Thameslink Programme.

Keolis UK CEO Alistair Gordon added that he was ‘delighted to get our hands on Thameslink again’, noting that Govia had ‘proved we can run very complex networks, carrying millions of people with complex timetables and manage major projects at the same time.’

Brown said GTR had assembled an executive team ‘unrivalled in the UK’, which brought a lot of experience to the franchise. ‘We really have got the A team’, he believed.

GTR Chief Executive Charles Horton accepted that there were ‘many commitments’ in the franchise agreement, and the owning companies had ‘demanding expectations’, but emphasised that he was committed to working closely with stakeholders. ‘This franchise will only be a success if the passengers notice and the staff are proud to work for it.’

Pointing out that ‘there will be no expensive rebranding’, Horton said ‘we will keep what works, but we will also introduce new ideas – we will go out and steal from the best’. By careful and 'meticulous planning', he believed that whatever the challenge, ‘we know there is a way’.

GTR is planning to devolve much of the day-to-day operational management to local leaders, with five Passenger Service Directors reporting to Chief Operating Officer Dyan Crowther. As well as the Thameslink, Great Northern and Gatwick Express businesses, the Southern brand will have two directors responsible for main line and suburban services. Crowther said a dedicated Integration Director was already looking at opportunities to develop the whole business, ahead of the absorption of Southern and Gatwick Express.

Running for seven years, the TSGN franchise has been structured as a management contract, reflecting the complexity and scale of the Thameslink Programme infrastructure works. Ticket revenues estimated at £12·4bn will be passed directly to the government, while Govia will be paid around £8·9bn to cover operating costs and a small margin allowance. There is also an incentive regime based on service quality targets including punctuality, customer experience and revenue protection, along with extra payments for the delivery of ‘key performance milestones’.