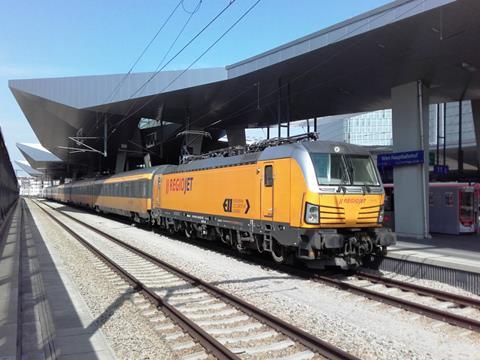 EUROPE: Open access operators Westbahn and RegioJet have signed an agreement under which Westbahn will take over the ‘technical operation’ in Austria of RegioJet’s international trains which link Wien, Brno and Praha.

Since their launch in December 2017, these trains have been operated between Wien Hbf and the Czech border station at Břeclav by Graz-Köflacher Bahn. According to RegioJet, ‘the co-operation with GKB has been highly professional and contributed to the general success of these trains’.

However, RegioJet has been developing its co-operation with Westbahn in other areas, including joint operation of a ticket office at Wien Hbf and cross-selling of tickets via their internet channels, so it would be a logical move to transfer the responsibility for Wien – Praha operations.

With effect from the timetable change on December 15 2019, Westbahn drivers and conductors will therefore take over responsibility for operating the RegioJet trains in Austria. Customer service and ticket checking functions will still be provided by RegioJet employees throughout the journey.

RegioJet reports that the service has been extremely successful, with the four daily trains each way achieving an average occupancy of more than 80% in the first 18 months of operation. The trains offer four classes of travel, with onboard facilities including free coffee, free wi-fi and seat-individual touch screen infotainment systems for each seat. Regiojet points out that unlike other operators on the route, its trains operate without any subsidies.

RegioJet reported a profit of €4m in 2018, when it carried almost 10 million passengers on its services in Austria, the Czech Republic and Slovakia. With ridership forecast to grow by 10% to 15% during 2019, it anticipates ‘further profit growth in the level of millions of euro’ this year.