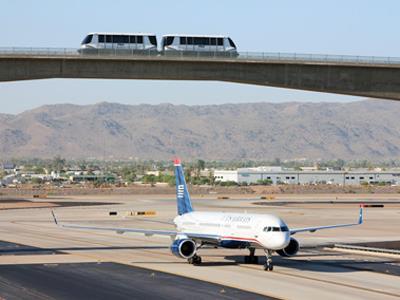 USA: The first phase of the PHX Sky Train automated peoplemover at Phoenix Sky Harbor International Airport in Arizona was opened by Mayor of Phoenix Greg Stanton on April 8.

The 2·7 km double-track elevated guideway crosses an active taxiway at a height of 30 m, providing sufficient clearance for a Boeing 747 aircraft to pass beneath.

The peoplemover connects Terminal 4, which handles 80% of the airport's passengers, with the East Economy car park and the Metro light rail stop at 44th Street and Washington. Driverless trains run every 3 to 5 min around the clock, with a capacity of 3 300 passengers/h per direction.

Bombardier Transportation has supplied an Innovia APM 200 peoplemover system including six three-car trainsets and CityFlo 650 CBTC under a $186m contract awarded in July 2009. It is also responsible for operations and maintenance under a separate 10-year contract worth $69m.

Phase 1a is due to extend the peoplemover by 1·1 km to Terminal 3 by early 2015, with a walkway connecting it to Terminal 2. A final phase would extend the line to the car hire centre.