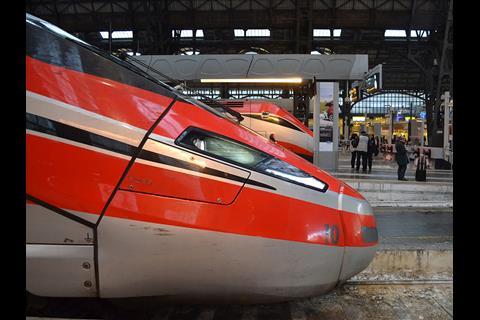 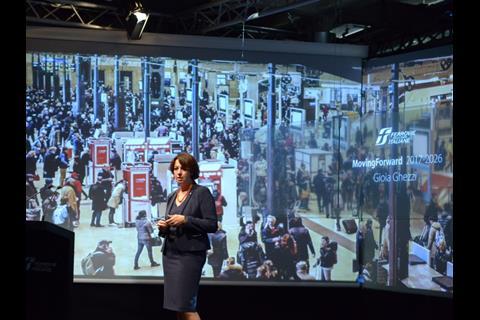 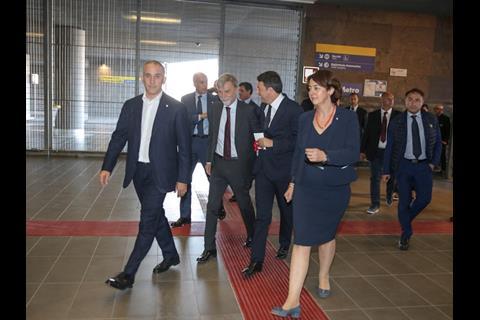 ITALY: Investment of €94bn and a doubling of annual revenues are envisaged in a 10-year strategic business plan for the FS Group unveiled in Roma on September 28 by President Gioia Ghezzi and Chief Executive Renato Mazzoncini.

Presented to stakeholders including Prime Minister Matteo Renzi and Minister of Infrastructure & Transport Graziano Delrio, the 2017-26 corporate strategy Moving Forward has been under development since December. It envisages a radical transformation of the state railway group to become ‘a gateway to an ecosystem of mobility’ bringing together rail, bus, carpooling and ride sharing from ‘a perspective of integration and competition’.

The plan focuses on five core pillars:
• integrated and inclusive mobility;
• integrated logistics;
• integration of rail and road infrastructure;
• international development;
• digitisation, as ‘an enabler of the entire plan’.

Noting that around 80% of travel today is by car, compared with 15% by public transport and 5% by rail, FS wants to offer ‘collective mobility from door to door’. It is looking to increase its overall share of the passenger market from 6% to 25% by 2026, by acquiring other operators and winning competitive tenders.

FS says a 10-year timescale is essential to facilitate major infrastructure projects and a radical transformation of the business. It plans to invest €73bn for infrastructure, €14bn in rolling stock and €7bn for research and development. Around €58bn has already been made available, with €35bn coming from the government through the current contract-programme and €23bn which will be self-financed.

Mazzoncini said there would be a ‘profound transformation’ as FS pursued an agenda of ‘international integrated global mobility’. This would see significant international expansion; between organic growth and new acquisitions, the number of employees is expected to rise from 69 000 to around 100 000.

The much-discussed proposal to privatise part of the group is to be taken forward next year with the setting up of a new long-distance passenger operator. This would be responsible for high speed, international and overnight trains, as well as state-supported long-distance services. Mazzoncini said between 30% and 50% of the new subsidiary would be sold to employees, individual shareholders and investment funds, but not to other companies. FS would retain a majority stake and control of the business.

The long-distance operator will assume ownership of Trenitalia’s long-distance fleet. With all 50 ETR1000 high speed trains expected to be delivered by June 2017, these will be concentrated on the Napoli – Roma – Milano – Torino axis, displacing ETR500 sets to the Torino – Venezia line, with ETR480 and ETR600 Pendolinos on other routes. The Freccia high speed operations are reported to be carrying around 50 million passengers a year, having grown their share of the Roma – Milano market from 30% to 62% over the past decade.

Infrastructure manager RFI will remain publicly owned, with FS holding 100% of its shares. The master plan envisages €62bn for investment in the rail network, including €33bn for conventional lines and €24bn for high speed lines and the TEN-T corridors, together with €5bn for ‘technical enhancements’ to improve resilience. Among the projects identified in the plan are the Terzo Valico route now under construction between Milano and Genova, the Brenner Base Tunnel and the Lyon – Torino corridor, which from part of the four TEN-T corridors in Italy. Another section of the Milano – Venezia high speed line will open between Treviglio and Brescia in December.

Improvements are envisaged for the urban networks serving major cities such as Roma, Milano, Genova and Firenze, permitting more trains at peak hours. More than €6bn is to be spent on lines in the south of Italy, including the Napoli – Bari high speed line, for which contracts are to be awarded by December, plus the Palermo – Messinaand Catania – Messina corridors in Sicily.

Shorn of its long-distance and freight businesses, Trenitalia is to become a regional passenger operator, potentially absorbing other regional and local railways. The operator has recently placed large framework contracts for up to 450 new regional EMUs with a potential value of €4bn and is currently negotiating for 50 DMUs. Over the next decade the number of seat-km operated is expected to increase by between 8% and 10%.

Subsidiary Busitalia has been growing rapidly in recent years, with revenues rising from €68m in 2011 to €330m in 2015. The group plans to buy around 3 000 new buses, in order to compete in a liberalised market with low fares. The group is also looking at the acquisition of established operators. FrecciaLink coach services will provide high quality connections into the high speed network, operating on both domestic and international routes. As part of its multi-modal strategy, FS plans to open 30 000 park-and-ride spaces by 2026.

Offering a ‘digital travel experience’, FS will invite its customers to ‘adopt a new travel philosophy’, using convenient digital tools that ‘accompany them throughout the journey’, providing real-time information and advice. FS says this ‘extended customer experience’, would enable it to ‘enter into the daily lives of people’ beyond simply providing travel services.

In the logistics sector, FS will create a single integrated business, Mercitalia, with around 4 000 employees. Three freight operating companies – Mercitalia Rail, Mercitalia Logistic and Mercitalia Terminal – will replace a variety of business units to eliminate duplication. The group plans to invest €1·1bn in freight rolling stock and €300m in terminals, supporting a doubling of revenues from €1bn in 2016 to €2·1bn in 2026.

FS anticipates that its international activities will increase from 13% of annual revenues to 23% in 2026, representing a four-fold increase in business. With a projected revenue of €4·2bn in 2026, this would ‘position FS Italiane on the same level as other European rail players’.

Growth is envisaged in three sectors. The first is to act as a general contractor, supporting the construction of railways ‘in countries with a strong infrastructure gap’. Target areas include the Middle East, southeast Asia, the Americas and Africa; FS has already supported proposals for two high speed lines in Iran.

The second would be train operations, ‘thanks to the planned liberalisation of the European railway area from 2020 under the Fourth Railway Package'. As well as Netinera, which is the second largest operator in Germany, Trenitalia now holds a 100% stake in Thello which would allow it to expand international open-access passenger services. FS has also prequalified to bid for franchises in the UK, and is currently finalising its acquisition of Trainose in Greece. The third aim would be to expand the group’s international activities in the public transport sector.