EU invites proposals for next round of Connecting Europe Facility funding 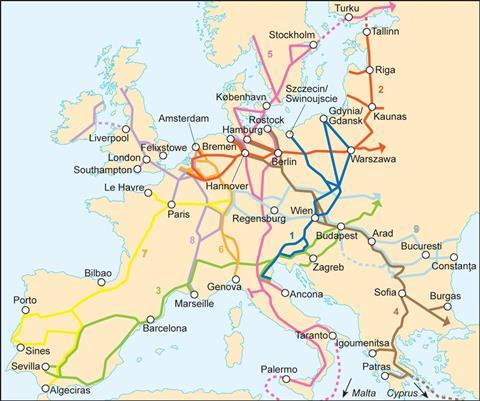 EUROPE: The European Commission has issued its second call for proposals under the 2014-20 Connecting Europe Facility, with €7·6bn available to co-fund projects which will improve EU transport infrastructure.

Rail-specific focuses in the latest call include funding for projects on the nine designated Trans-European corridors, for interoperability and for ERTMS.

All 28 EU member states can apply for €1·09bn of this tranche, while €6·47bn is reserved for the 15 countries which are eligible for cohesion funding. Applicants have until February 16 2016 to submit proposals, which will be evaluated by May 2016 and finalised in autumn 2016.

The grants will support projects which are difficult to implement owing to their cross-border nature or which have a very long-term return on investment. The CEF will meet up to 50% of the cost of studies for projects on the TEN-T core network, while project co-financing will range from 10% for cross-border road projects to 50% of traffic management systems such as ERTMS and 85% in cohesion states.

'Efficient, intelligent and sustainable transportation is essential to Europe's competitiveness', said Commissioner for Transport Violeta Bulc on November 5. 'With this new CEF call, we are not only looking for waterway or rail projects; we are aiming at creating jobs and boosting growth. The focus on the cohesion states also reflects our willingness to better interconnect Europe and move towards a deeper internal market, another priority of the Commission.'

Chair of the European Parliament Transport Committee, German Green MEP Michael Cramer, called for the funding to be directed towards smaller schemes, saying the Commission should 'put the rehabilitation of small cross-border rail sections before the construction of new large-scale projects'.