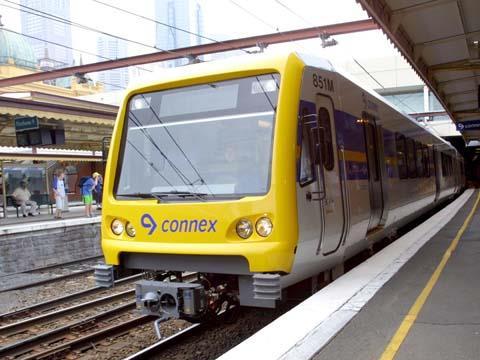 AUSTRALIA: On July 12 Victorian Premier John Brumby unveiled the routes for two rail links in Melbourne as part of the A$38bn Victoria Transport Plan launched in 2009.

The A$4·3bn Regional Rail Link involves the development of a new commuter service from West Werribee to the city, entailing construction of new tracks on the existing corridor through Sunshine and Footscray and new stations at Tarneit and Wyndham Vale. The project is designed to separate regional and suburban services, providing dedicated tracks for regional trains from Geelong, Bendigo, and Ballarat and increasing capacity on suburban routes.

The A$4·5bn Metro Rail Tunnel would link Dynon and St Kilda Road with five underground stations. This would carry a 'metro -style' service from Sunbury to St Kilda, increasing capacity by 12000 passengers/h.

Several projects in the plan are already approaching fruition. On June 6 a A$36m station was opened at Coolaroo between Roxburgh Park and Broadmeadows on the Craigieburn Line. This was followed by a ceremony at Diggers Rest on June 26 to mark the start of work to extend the 1·5 kV DC electrification by a further 15 km from Watergardens to Sunbury on MTM's Sydenham commuter line.

Meanwhile, this month will see the return of V/Line passenger trains to the 60 km Ballarat - Creswick - Clunes - Maryborough route following a A$50m project to reinstate a service withdrawn in 1993. Abigroup is undertaking civil works at Maryborough and Creswick stations while Rail Signalling Services is responsible for upgrading eight level crossings. There will be a daily Maryborough - Ballarat return service with connections to Melbourne.