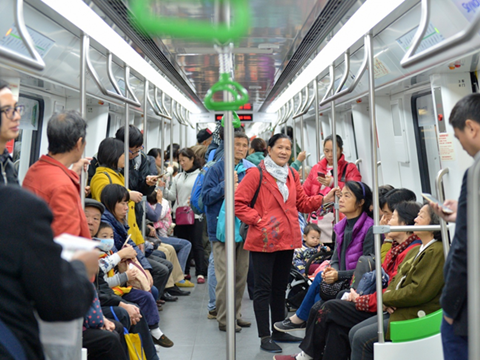 CHINA: The last few days of 2016 were filled with openings of metro lines and network extensions in China. In addition to the first metro line in Hefei, new lines opened in Beijing, Guangzhou and Hong Kong, as well as an extension of one of Chongqing’s monorail lines.

Line 2 of the Wuhan metro reached Tianhe International Airport with the opening of a 19·7 km northern extension from Jinyintan on December 28. The seven stations include an interchange with Line 3 at Hongtu Boulevard.

On the same day Nanning’s only metro line tripled in length. The 21 km western extension of Line 1 from Nanhu to Shibu adds 15 stations including two interchanges with the future Line 2 and an interchange with main line services. The initial section of Line 1 had opened in June with 10 stations on a 10·4 km alignment.

Line 6 of the Tianjin metro reached Nansunzhuang on December 31 when a northeastern extension opened from Changhong Gongyuan via Tianjin West and Tianjin North railway stations. There are 16 stations on the new section, plus one which is due to open later.