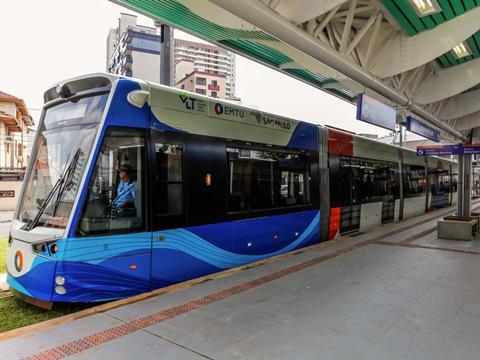 An eastern section from Bernardino to Port opened with three intermediate stops, one of which is due to open later this month. At the other end of the route, a one-stop extension opened from Mascarenhas de Moraes to Barreiros.

The inauguration coincided with the delivery of eight more light rail vehicles, bringing the fleet to 15. In 2012 a consortium of T’Trans and Vossloh signed a contract to supply a total of 22 Tramlink LRVs.

The first passengers on the Santos light rail network were carried in April 2015 with the start of trial operation between Mascarenhas de Moraes and João Ribeiro. Revenue service began later in the year and was extended to Pinheiro Machado in January 2016. On December 28 the line reached Bernardino.