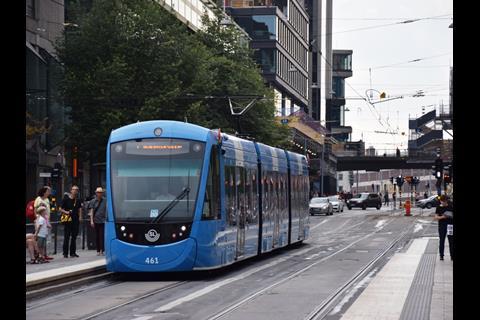 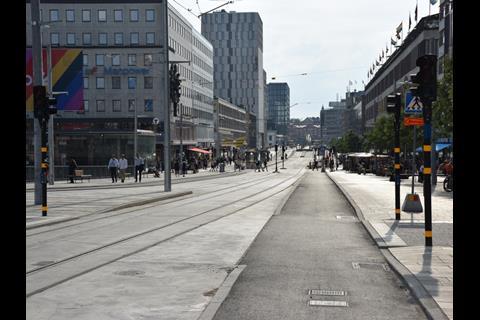 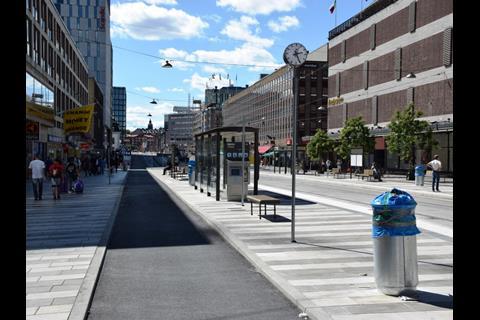 SWEDEN: A short but significant extension of Stockholm tram Route 7 was opened for revenue service at 11.30 on September 3.

Adding 560 m of double track and one stop, the extension from Sergels Torg to T-Centralen provides interchange to the city’s three metro routes and the cross-city suburban railway, as well as main line services at Stockholm C. Opening of the tram extension completes the main phase of the Spårväg City project, which included extensive reconstruction of the area around the central square at Sergels Torg.

The new terminus is sited in the middle of Klarabergsgatan, which has been closed to car traffic, providing room for a conveniently located tram and bus interchange with easy access to the metro hub and the city’s main shopping district. The pedestrian precinct is expected to be used by around 90 000 people each day.

The Spårväg City project to expand the one-time Djurgårdslinjen museum tramway to provide a regular public service began in 2010 with the opening of a 400 m extension from the terminal loop at Norrmalmstorg to a temporary terminus at Sergels Torg. Work on the second phase began in 2012; the total cost including compensation to traders along the remodelled streets is put at approximately SKr390m.

A feasibility study is due to be completed in 2019 for the long-planned branch from Djurgårdsbron running northeast to Ropsten via Frihamnen. This would expand Route 7 into a Y-shaped tram network serving the eastern part of the capital. The branch would also provide connections with the metro Red Line and Lidingöbanan light rail line at Ropsten.