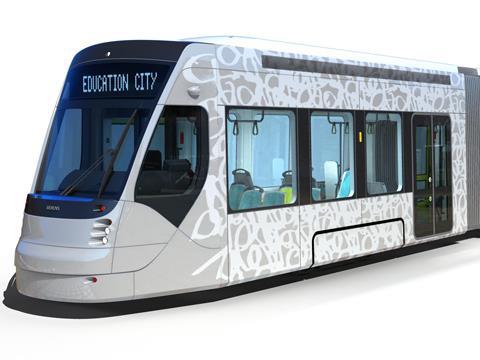 QATAR: Siemens Rail Systems has been awarded a turnkey contract valued at more than €100m for the development of a 11·5 km catenary-free tramway in Doha for opening in late 2015.

The contract announced on July 30 has been awarded by the Qatar Foundation for Education, Science & Community Development, which is creating a 1 500 ha car-free education and research campus to the west of Doha under the Qatar National Vision 2030 strategy.

The standard gauge tramway will have a fleet of 19 three-section Avenio 100% low-floor trams. These will be 27·7 m long and 2 550 mm wide, with a capacity of 239 passengers. Equipment to cope with the local climate will include powerful air-conditioning and sunshades to the protect roof-mounted electrical equipment from radiant heat.

The Avenio trams will be fitted with Sitras Hybrid Energy Storage units, comprising double-layer capacitors and a traction battery. Eliminating the need for conventional overhead electrification, the Sitras HES units will be charged from 750 V DC overhead conductor rails to be installed at each of the 25 stops.

Leighton Contracting Qatar has a US$124m contract covering design and construction of the track, stops, depot and administration building. Four of the stops will have platform edge doors.