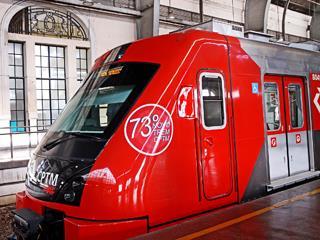 BRAZIL: Prequalification bids have been invited for construction of a rail link to São Paulo’s Guarulhos International Airport. Announcing the go-ahead for the project in December, state governor Geraldo Alckmin said the winning bidder would be selected in early 2013, with the aim of starting construction in March and completing the line by the end of 2014.

Unlike earlier proposals for a dedicated airport express, the new line will form part of CPTM’s suburban network, designated as Line 13 Jade. The 11 km route will diverge from the existing Line 12 Sapphire at Engineer Goulart, near Tatuapé in the northeast of the São Paulo conurbation. It will have two stations: one at Park Cecap in the town of Guarulhos, serving the bus terminal and general hospital, and the other at the airport. Studies have also been commissioned for a possible third station serving the São João region.

Alckmin said that the R$900m project would be partially funded by European agencies. Eight new trainsets will be required at a cost of more than R$300m; these through-gangwayed sets will be 172 m long and fitted with additional luggage racks. Line 13 services will run from the CPTM-metro hub at Bras near the city centre, sharing the Line 12 tracks as far as the junction. End-to-end journey time is estimated at 35 min, compared to 55 min for the current airport bus service.

‘This is a very important project for our city’, said the Mayor of Guarulhos Sebastião Almeida, adding that it would form a key part of the four-year Urban Mobility Plan which all Brazilian cities have been instructed to prepare. As well as airline passengers, he expects the rail link to be used by airport staff and residents of Guarulhos now commuting to and from the centre of São Paulo by car or bus. The line is expected to carry around 120 000 passengers per day.

Alckmin said that the airport authority was also looking at building a peoplemover or light rail line to connect the railway terminus with key developments around the airport site, including Terminal 4, used by a number of low-cost airlines, which is around 2 km from the planned station.