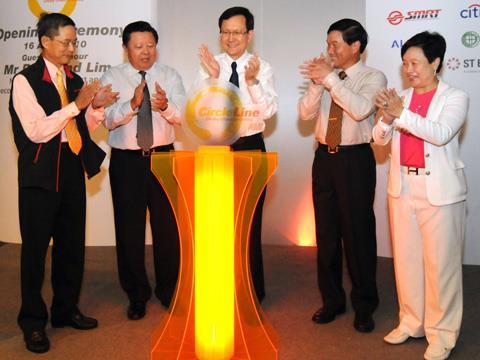 SINGAPORE: On April 16 Transport Minister Raymond Lim inaugurated phase two of the Circle Line from Bartley to Dhoby Ghaut by cutting a ribbon at the award-winning Bras Basah station before taking the first train ride.

Speaking at the ceremony, he acknowledged that ‘the journey towards the opening of this stretch of the Circle Line has not been an easy one’, and thanked everyone involved in bringing the project to fruition.

The 11 km eastern end of the orbital route with 11 stations opened to the public at 06.00 the next day. The initial 5·7 km section from Marymount to Bartley with five stations entered service almost a year ago, on May 28 2009.

SMRT added more trains and reduced headways to cope with the crowds that were expected to try the extended line, including fans heading for Stadium station to attend a concert by the Mandopop group SHE at the Singapore Indoor Stadium. The new section also serves other key cultural, sporting and leisure destinations such as the Esplanade and Bras Basah.

Interchanges are provided to the North-South and North East lines at Dhoby Ghaut and to the East-West Line at Paya Lebar. Many commuters will enjoy shorter travel times and lower fares as they can now avoid the city centre and the busy interchanges at City Hall and Raffles Place. For example, journey time from Serangoon to Paya Lebar is cut from 32 min to 9 min and now costs S$1·05 instead of S$1·60.

About 200 000 people are expected to use the 16 stations between Dhoby Ghaut and Marymount every day. The remaining section of the 33 km line from Marymount to Harbour Front is due to open next year.