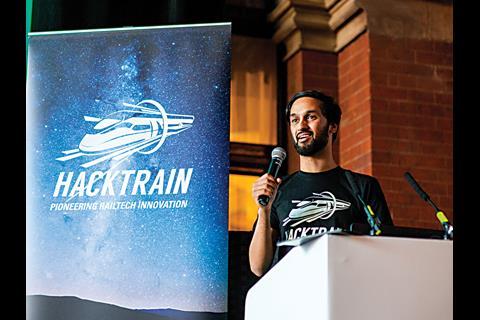 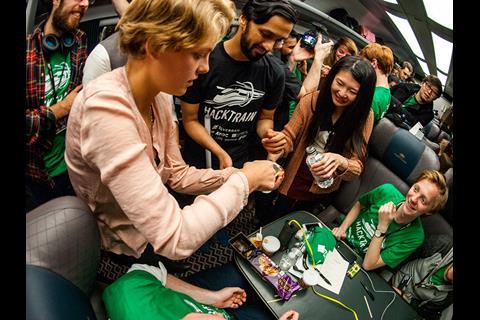 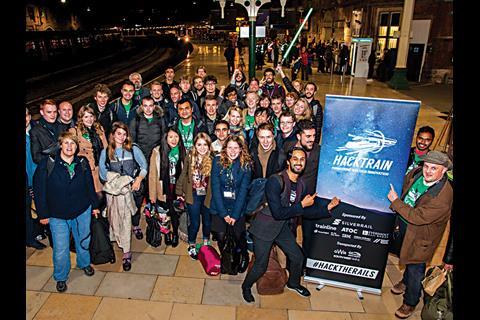 UK: Strong backing by the Department for Transport and the UK rail industry saw 120 software developers take part in the HackTrain 2.0 digital innovation event over the weekend of November 21-22.

HackTrain co-founders River Tamoor Baig and Alejandro Saucedo aim to bring to the rail sector the concept of solving industry challenges through 'hackathons', building on experience in aviation, finance and other markets.

Their aim is to foster the development of 'RailTech', the concept of a rail as a distinct market sector for software with its own industry eco-system, and to benefit from the opportunities presented by the combination of new technologies and the expected ongoing growth of the passenger rail market.

This was the second HackTrain, following an inaugural event in March which had just 40 participants. The first HackTrain was purely industry-led, however Baig told Railway Gazette International that DfT 'noticed the innovation and wanted to support' the second event, and 'we are able to do more as a result.'

The 120 participants were selected from around 1 000 international applicants and formed into teams. After the launch at London St Pancras on November 20, the teams travelled to Bristol, Bournemouth and Newcastle, where they had 48 h to tackle challenges set by the industry supporters who provided access to their data and systems. The teams then met up at the National Railway Museum in York to present their prototypes.

Following a consultation period, 10 teams were selected to present their ideas to train operators for the chance to win a place in the HackTrain Accelerator.

This three-month industry-backed non-competitive programme will provide 10 RailTech start-ups from around the world with £25 000 of investment funding, industry mentoring and access to potential clients. It will help them to understand the sector-specific needs of the rail industry and what Baig called the 'micro-policies that are the biggest barriers to innovation'. He hopes HackTrain participants will 'end up loving the rail industry' by learning about its complexities, and thus gain a desire to address its challenges.

'Technology has disrupted other industries such as finance and aviation making them more efficient and useful to everyone. By harnessing technology and data in the right way we can take the same leap forward in rail', he said.

Demonstrates how existing information about disruption could be restructured to make it machine readable and analysable, enabling developers to build better tools for customers to negotiate disruption.

Uses face recognition and on-train CCTV to count passengers to let operators and passengers see where seats are available in real-time.

Designed to help passengers understand which trains they can travel on with their ticket. By scanning the paper train ticket or QR code, the app calls an online journey planner to identify all train services for which the ticket is valid.