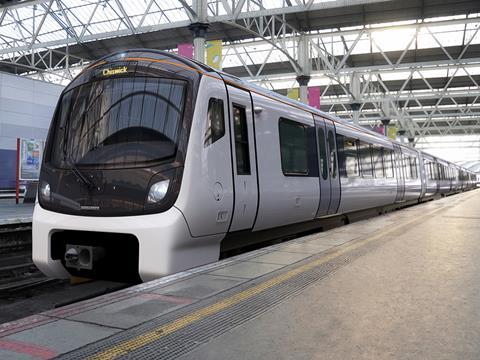 The contract announced on June 20 covers a total of 750 cars which are to be built at Bombardier’s Derby plant. The EMUs are scheduled to enter service on London suburban routes and from London Waterloo to Windsor & Eton Riverside and Reading between mid-2019 and December 2020.

‘We have exciting plans for the South Western franchise and these new trains are an important step on the way to delivering an improved journey experience’, said First Rail Managing Director Steve Montgomery. ‘We know from listening to passengers and stakeholders that alongside improved performance, what they want to see is additional seats and we will deliver this via these state-of-the-art trains.’

The EMUs are to be maintained by South Western franchise employees at Wimbledon depot, supported by Bombardier employees under a Technical Services & Spares Supply Agreement running for the seven-year franchise period. There is an option to extend the TSSSA for 11 periods if the franchise is extended.

Funding of the rolling stock has been led by leasing company Rock Rail and partners SL Capital and GLIL Infrastructure. Senior debt is being provided by a consortium of UK, European and North American institutional investors.

‘Rock Rail is delighted to be funding and leasing these trains which will bring a step change to the travelling experience for so many commuters’, said CEO Mark Swindell. ‘Our funders are leading pension and insurance institutions from both the UK and overseas who are directly investing in the UK’s long term economic infrastructure, on a basis that delivers significant cost savings and value-for-money enhancement for UK operators.’