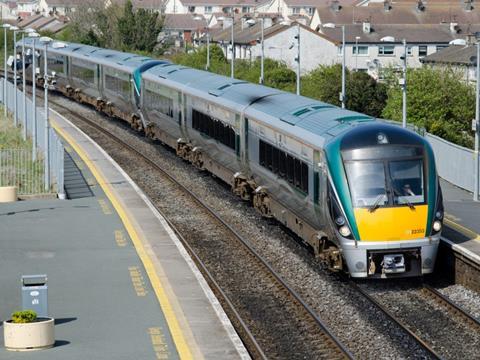 This will provide a 34% increase in peak capacity across the Kildare Line, Maynooth Line and Northern Line routes in the Greater Dublin area.

The order is being overseen by the National Transport Authority with funding provided as part of Project Ireland 2040. The €118m+VAT contract for the vehicles will be directly awarded to Mitsui & Co, which originally supplied the 63 Hyundai Rotem units under a framework agreement signed in 2004. Deliveries are to begin in late 2021.

‘This project is hugely significant and will deliver real benefits to rail commuters’, said Ross. ‘We want more people to make the switch to sustainable mobility and to do that we need projects like this’.

Iarnród Éireann carried 48 million passenger-journeys in 2018, and ridership is expected to top 50 million for the first time this year.

Initiatives have been put in place to encourage passengers to avoid the busiest periods, including a ‘stagger your journey’ campaign targeting people able to change their travel time and a peaktime.ie website showing which services are least crowded.

However, CEO Jim Meade has warned that overcrowding could force the operator to make peak services reservation-only. ‘That would put a restriction on people’s ability to travel because currently they can pre-book or they can walk up and go, but certainly in order to manage capacity it may be something we have to look at in the long term’, he recently told national broadcaster RTÉ.

Trains required pre-booked advance tickets are usually only operated on especially busy days such as during major sporting events.

Dermot O’Leary of the National Bus & Rail Union said the pressure on services should have been anticipated and additional vehicles ordered sooner. ‘The dogs on the street knew that the population was exploding and for the population to explode they would need transport provision’, he said. ‘We are not talking about building new railway lines here we are talking about using the existing footprint.’