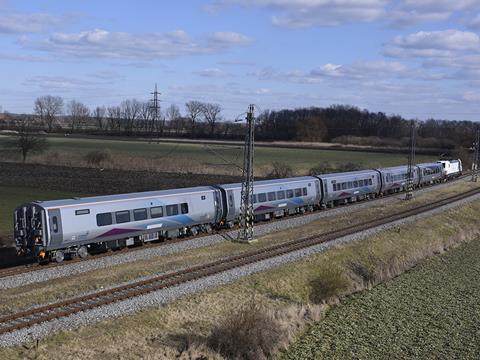 UK: Now undergoing trials at the Velim test track in the Czech Republic is a set of Mark 5A locomotive-hauled coaches destined for inter-city services across the north of England operated by TransPennine Express.

Due to enter service later this year, the set is part of a 13-strong fleet of five-car push-pull trains. Built by CAF in Spain and financed by Beacon Rail, they will be hauled by Class 68 diesel locomotives also owned by Beacon Rail and leased by Direct Rail Services, which will sublease them to TransPennine Express.

The trains will operate between Liverpool, Manchester, Leeds, York, Scarborough and Middlesbrough. Maximum speed in commercial service will be 160 km/h, but the fleet has been designed to run at 200 km/h with electric traction in the future.

TransPennine Express, owned by FirstGroup, has branded the new fleet as Nova 3. As part of a comprehensive fleet replacement programme, the operator has also ordered 12 five-car inter-city EMUs from CAF. To be known as Nova 2, they are being financed by Eversholt Rail and will operate from autumn 2019 on services from Manchester Airport and Liverpool to Glasgow and Edinburgh.

TPE’s third fleet of new trains has been ordered from Hitachi Rail Europe with finance by Angel Trains. Intended for services linking Liverpool, Manchester, Newcastle and Edinburgh, the 19 electro-diesel AT300 multiple-units will be branded Nova 1. They are due to enter service in mid-2019.