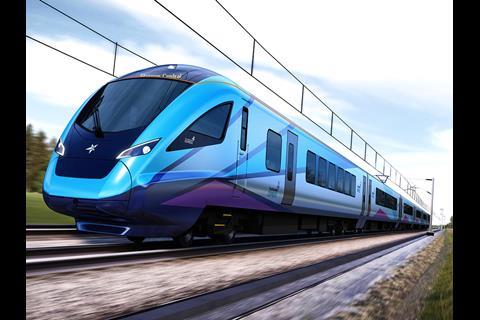 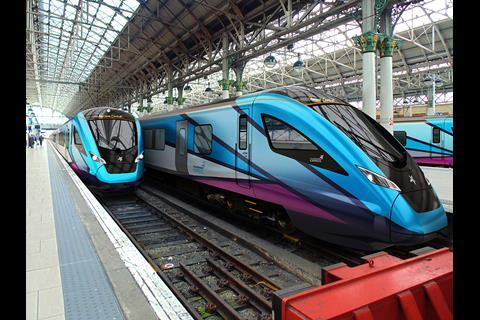 UK: Passenger franchisee TransPennine Express has announced orders worth £230m for CAF electric multiple-units and locomotive-hauled coaches for delivery in 2018-19.

The £120m order for 12 five-car Civity UK InterCity EMUs with a maximum speed of 200 km/h is to be financed by Eversholt Rail. The 25 kV 50 Hz units are scheduled to enter service by April 2019 and will be used on Anglo-Scottish services operating on the West Coast Main Line from Manchester and Liverpool to Glasgow and Edinburgh.

The 13 sets of five-car hauled coaches will be financed by Beacon Rail Leasing, and will work in push-pull mode with Class 68 diesel locomotives owned by Beacon Rail which will be subleased from Direct Rail Services. TPE said ‘most of the required Class 68 engines are already built and by buying state-of-the-art carriages to be pulled by these engines, much-needed additional capacity can be introduced quickly’.

The coaches will initially operate at up to 160 km/h, with the capability to run at 200 km/h as routes are electrified. They will enter service from spring 2018, initially operating between Liverpool and Newcastle. Later in 2018 some will begin running to and from Scarborough. Once TPE's Hitachi AT300 fleet arrives in December 2019, the coaches will then be transferred to routes from Liverpool and Manchester Airport to Middlesbrough and Scarborough.

TPE said the new rolling stock would supplement its current fleet and ‘more than double capacity on all inter-city routes across the North and into Scotland by 2019’. The ‘vast majority’ of services would operate with at least five carriages, rather than the current three. TPE said all its trains would have free wi-fi with media servers streaming television shows, films and entertainment, a ‘modern interior with spacious seating’, air-conditioning and power sockets at every seat.

TPE’s parent company FirstGroup undertook competitive tending for the supply of the rolling stock and separate financing. TPE said no UK manufacturers took part in the rolling stock tender won by CAF, as their plants are currently at capacity with Bombardier working on the Crossrail EMUs and Hitachi supplying the Intercity Express Programme fleet.

CAF will also provide technical support and spares and invest in a new logistics hub. Maintenance of the trainsets will be undertaken by Alstom at its facilities at Longsight (Manchester), Edge Hill (Liverpool) and Polmadie (Glasgow), with 25 new jobs to be created.

The orders announced on May 20 follow an earlier agreement for Hitachi to supply TPE with 19 five-car electro-diesel AT300 trainsets from its plants at Kasado in Japan and Newton Aycliffe in northeast England.

‘Whether travelling to work, for business or leisure, our services are going to offer more seats, improved connectivity and a higher standard of comfort’, said TPE Managing Director Leo Goodwin. ‘The on-board experience will be second to none and we will provide customers with a real alternative to the car and congested road network.’