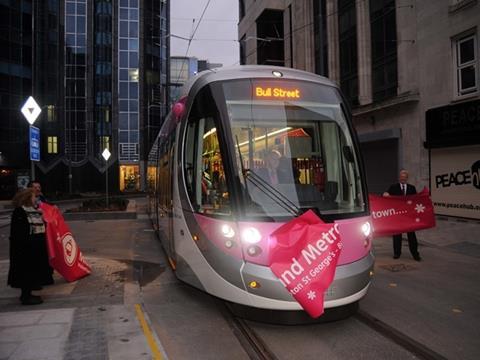 UK: December 6 marked the opening of the first extension of the Midland Metro light rail route in Birmingham since the line opened in 1999.

The short section including new stops at Snow Hill and Bull Street is the first phase of the 1·4 km city centre extension to New Street station. It is being built by the West Midlands local transport executive Centro, which expects to announce a date for the completion of the route early next year. The £128m project includes the purchase of 20 Urbos 3 trams from CAF for £40m; these have now all been delivered.

According to Councillor John McNicholas, Chairman of the West Midlands Integrated Transport Authority’s Delivery Committee, £1·2bn is to be invested in public transport across the region over the next 10 years.

Work is beginning on a further two-stop extension west from New Street to Centenary Square, which is expected to be commissioned in 2019. Funding has already been earmarked to continue the route to Edgbaston via Broad Street and Five Ways; this could open by 2021.

Longer-term plans include a branch through Digbeth, which could open by 2023; this would also serve the planned High Speed 2 station at Curzon Street.