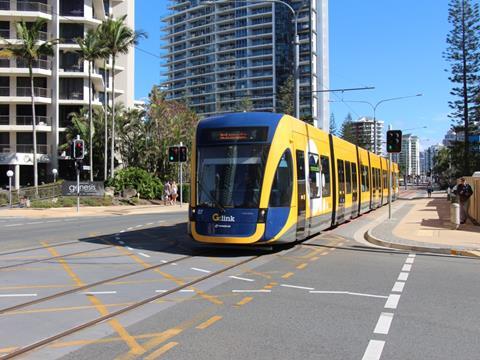 AUSTRALIA: The federal government has agreed to contribute A$112m towards the next phase of the Gold Coast light rail project in South East Queensland, Minister for Cities, Urban Infrastructure & Population Alan Tudge announced on November 5.

Provisionally costed at A$670m, the 6·4 km Stage 3A extension from Broadbeach South to Burleigh Heads would run in the central reservation of the Gold Coast Highway, adding eight stops to serve the Nobby Beach and Burleigh Heads districts. Journey time is expected to be around 16 min. The package would include improved pedestrian and cycling facilities along the route and a remodelling of the bus interchange at Burleigh Heads.

‘Extending the light rail from Broadbeach to Burleigh Heads is a vital step to support a growing city like Gold Coast’, said Tudge, adding that the project would ‘bring many opportunities for urban revitalisation’, as well as supporting 2 400 jobs during the construction phase.

The federal funding has been allocated as part of an A$7·6bn package of transport infrastructure investment planned by the national government. Queensland has yet to finalise its contribution for Stage 3A; the state government is currently working with the City of Gold Coast to prepare a detailed business case, which is expected to be ready by the end of this year.

Welcoming the federal commitment as ‘a good start’, Queensland’s Minister for Transport & Main Roads Mark Bailey said that, following completion of the business case, ‘we will go and negotiate with all levels of government to try to come to a funding package’. The current target is to open the extension for revenue service by 2023.