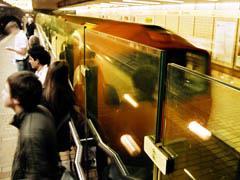 UK: From December customers of mobile telephone company O2 will be able to make calls from five of the busiest stations on the Glasgow subway.

Arqiva will provide multi-user distributed antenna systems to enable mobile phones to work underground at Buchanan Street, St Enoch, Kelvinbridge, Hillhead and Partick. Customers will be able to use 2G services including voice calls and text messages, as well as 3G services such as video, internet access and MMS.

Although initially limited to platforms and concourses at the five stations, O2 says the technology could eventually be used to provide coverage around the whole of the 10 km circular line, which runs entirely underground. The Glasgow deployment could also provide a benchmark for rollouts in other similar urban rail environments, including the London Underground.