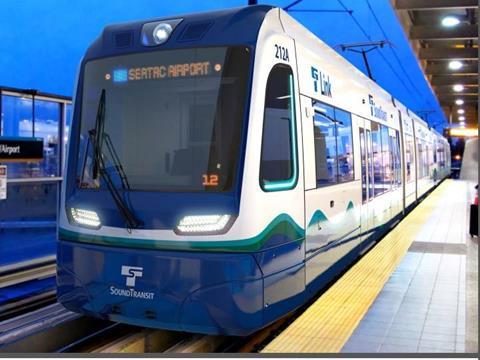 USA: Sound Transit has approved a contract for Siemens to supply a further 30 low-floor light rail vehicles. The $131m order forms an option on an order placed in September for 122 LRVs.

The 30 LRVs are due to arrive no later than 18 months after completion of the previous order, deliveries of which are due between mid-2019 and mid-2024. The first 40 are to be delivered in time for the opening of the Northgate Link extension in 2021, with the remainder due before testing begins on the Redmond and South King projects.

The latest order would provide the rolling stock required for extensions to Federal Way and downtown Redmond. ‘Ordering more Link cars earlier than planned is just one example of how we're moving aggressively forward to build a light rail network that will serve up to 188 million riders a year by 2040’, said Sound Transit CEO Peter Rogoff.

To be built at Siemens’ Sacramento plant in California, each LRV would have 74 seats.