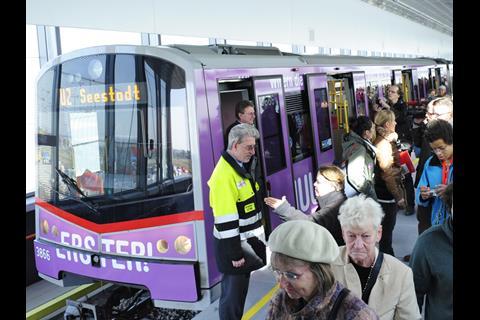 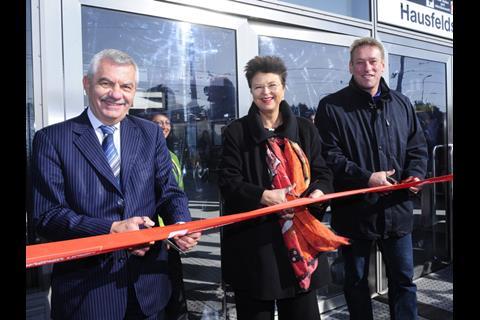 AUSTRIA: Celebrations on October 5 marked the opening of an extension of Wien metro Line U2 from Aspernstraße to the Seestadt urban development area on the site of the former Aspern airport. This takes Line U2 to almost 17 km with 20 stations.

Construction of the 4·2 km elevated extension cost €360m, with work starting on October 28 2009 and being completed on schedule just under four years later. There are stations at Hausfeldstraße, Aspern Nord and Seestadt, and the shell of a future fourth station at An den Alten Schanzen. Siemens supplied automatic train control equipment for the extension.

In an associated project, tram Route 26 has been extended on 4·7 km of new track from Kagraner Platz to the U2 station at Hausfeldstraße, with 10 new stops. Much of this extension is along segregated alignment, including 1 km of grassed track

'By investing in metro construction we not only create infrastructure for generations of Wien residents, but also jobs in economically challenging times', said Deputy Mayor Renate Brauner.

At the same time as the opening of the U2 extension, frequencies across the U-Bahn network were modified to better reflect demand, with longer headways in the early morning but more frequent trains at peak times. Philadelphiabrücke station on U6 has been renamed Bahnhof Meidling to match the adjacent ÖBB station.