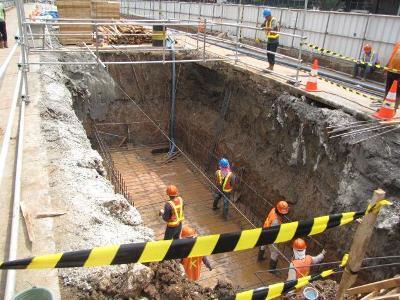 Excavation began at Hotel Indonesia Traffic Circle, where there will be an underground station. A guide wall is due to be completed within three months, which will allow a diaphragm wall to be built. The timescale for the completion of this and subsequent station works is four years.

In May the city authorities announced the winners of the tenders for the three underground civil works packages. Sumitomo Mitsui Construction Company and PT Hutama Karya is undertaking the work at Hotel Indonesia Traffic Circle, whereas the other two packages are being carried out by a consortium of Shimizu, Obayashi, Wijaya Karya and Jaya Konstruksi.

Two of the three elevated civil works packages will be carried out by a Tokyu-WIKA consortium, with a consortium of Obayashi, Shimizu and Jaya Konstruksi responsible for the other.

Revenue operations on the 15·7 km line are planned to start in early 2018. An 8·1 km northern extension is planned as the second phase.