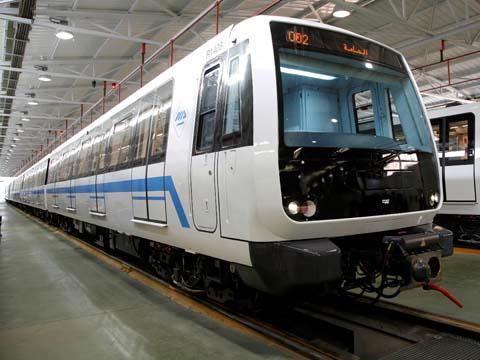 Under construction for almost three decades, the first phase of Alger metro Line 1 links Haï el Badr in the southeast to Tafourah Grande Poste in the city centre. The 9·2 km line runs north from Haï el Badr and then curves west to follow the coastline into the city. Developed by Entreprise Métro d’Alger, the line is being run by RATP El Djazaïr, under an eight-year operating contract.

Whilst the first tunnels were excavated by local firms, a €380m turnkey contract for completion of civil works, supply of E&M systems and fitting out was awarded in January 2006 to a Siemens-led consortium including CAF and Vinci Construction.

As well as project management and overall delivery planning, Siemens has been responsible for supplong the Trainguard MT CBTC, Airlink radio communications and Digiloc train location systems. The company also provided telecommunications and power supply networks, the track and fare collection system, and equipped the operations control centre. CAF has supplied 14 six-car trains, while Vinci Construction was responsible for the 10 stations, tunnel ventilation and Bachdjarah depot.

Serving a city with more than three million inhabitants, the line is expected to carry 300 000 passengers per day in the medium term. EMA is currently planning a 3·5 km extension of Line 1, as well as two further routes to create a three-line network.

At Hussein Dey the metro will connect to EMA’s 23 km tram route serving Bab Ezzouar, Bordj El Kiffan and Derana, which is being built as a turnkey project by the Méditerrail consortium of Alstom, ETRHB and Todini. Revenue services began on the initial 7·2 km section of this line between Bab Ezzouar and Bordj El Kiffan earlier this year.