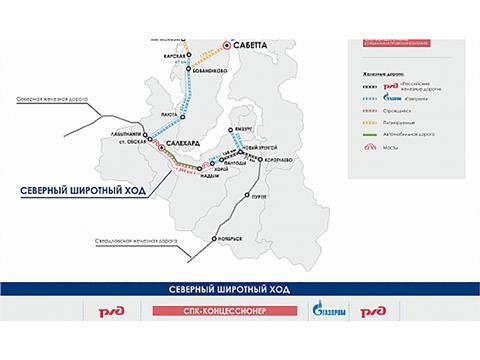 RUSSIA: Having been approved by Prime Minister Dmitry Medvedev in mid-August, a formal concession agreement covering construction of the Northern Latitudinal Railway was signed at the ProMotion 1520 forum in Sochi on October 3.

The SShKh consortium will be responsible for financing, building and operating the 113bn rouble line, which would form a 353 km route between the current railheads at Labytnangi and Nadym. Construction is expected to begin in 2019 for completion in 2025.

As part of the project, Russian Railways is to modernise the 1 318 km Kotlas – Labytnangi line to the west, and the 93 km Korotchaevo – Pangody line to the east. Gazprom will complete the construction and commissioning of its own 112 km Pangody – Nadym line in the east. These works by RZD and Gazprom are valued at 90bn roubles, and the overall cost of the project is put at 239bn roubles.