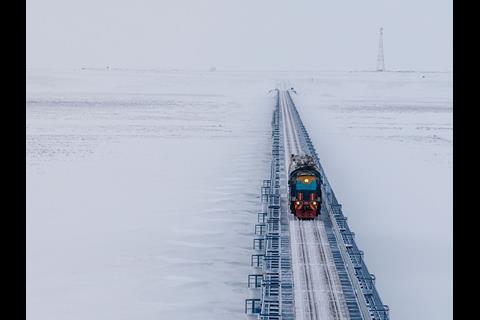 RUSSIA: An agreement for joint investment in the completion of the long-planned Northern Latitudinal Railway was signed by Russian Railways and Gazprom on March 30. The construction of a link between the current railheads at Labytnangi and Nadym and upgrades to increase capacity on the connecting lines at each end would support resource extraction and development in northwest Siberia and reduce the distance to ports.

Construction is planned for 2018-22. Future traffic is estimated at 23·9 million tonnes/year, mainly gas and oil.

Under the terms of the agreement, Gazprom is to establish a special purpose subsidiary which would upgrade its existing 112 km line from Pangody to the railhead at Nadym.

RZD is to create a special purpose subsidiary which would act as concessionaire to the government for the construction of the new section of line. This would start at Obskaya near Labytnangi, cross the River Ob to Salekhard on a major road and rail viaduct and then run 353 km eastwards to Nadym, where another major bridge is required. This concessionaire would also lease the Nadym – Pangody line from Gazprom. It is envisaged that the special purpose company could have shareholders other than RZD, possibly including Gazprom.

Yamal-Nenets Autonomous District is to contribute towards the cost of the bridges, and would provide land and tax breaks under an agreement signed with RZD on October 19 2016.

RZD would modernise its existing line to the current railhead at Labytnangi and the line connecting Pangody to Novy Urengoy and Korotchaevo, creating a 707 km corridor from Obskaya to Korotchaevo.

Construction of a Salekhard – Nadym – Igarka railway began in the 1940s using prison labour, but the project was abandoned following the death of Stalin.