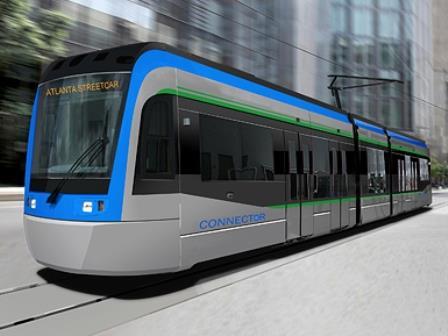 USA: Siemens Industry Inc has been awarded its first North American street-running tram order, a $17·2m contract from the city of Atlanta for four cars based on the S70 Avanto light rail vehicle platform.

They will be used on a 4·3 km line with 12 stops linking the Martin Luther King Jr Center with Centennial Olympic Park. The first of the 70% low-floor trams is expected to be delivered in September 2012 for revenue services to begin in early 2013.

‘The Atlanta Tram project will keep the City of Atlanta competitive with other cities by improving our transit connectivity, boosting our tourism industry, helping local businesses, and building a more sustainable future’, said Mayor Kasim Reed. ‘Our agreement with Siemens will ensure that we have modern, world-class vehicles along the route to serve Atlanta residents and visitors for years to come.’

The cars will be built at the Siemens plant in Sacramento, using propulsion systems and other major components manufactured by the company in the Atlanta suburb of Alpharetta.

The contract was issued by the Metropolitan Atlanta Rapid Transit Authority on behalf of the City of Atlanta and the Atlanta Downtown Improvement District. Civil works are expected to begin this autumn.