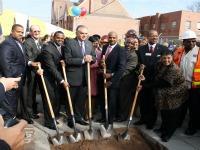 The 4∙2 km tram route with 12 stops will linking the Martin Luther King Jr National Historic Site with Centennial Olympic Park, connecting with Marta’s heavy metro network. A joint project led by the City of Atlanta, the Atlanta Downtown Improvement District and MARTA, the streetcar line was awarded $47∙6m of federal funding in October 2010; this was the largest capital grant in the second round of the Transportation Investment Generating Economic Recovery grant programme.

In May 2011 Siemens was awarded a $17•2m contract to supply four cars based on the S70 Avanto LRV platform. The company’s first order for North American streetcars, the vehicles are being assembled in Sacramento, using propulsion systems and other components manufactured at Siemens’ plant in the Atlanta suburb of Alpharetta.

Speaking at the groundbreaking, LaHood said ‘all across America, there is work to be done on projects like this. Now is the time to connect people who need work with the work we need to do to improve our nation’s transit centres, highways, railways, airports and ports.’