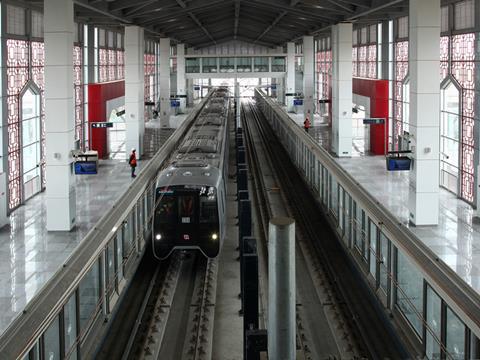 CHINA: The first phase of Beijing metro Line 14 opened on May 5, running 12·4 km from Zhangguozhuang in the southern Fengtai district to Xiju. The first section of Line 14 has seven stations, including Garden Expo Park which will serve the 9th China (Beijing) International Garden Expo which begins on May 18.

At Xiju there is an interchange with Line 10, which was extended from Xiju to Shoujingmao on May 5 to become a 57 km outer orbital ring with 45 stations, including 14 interchanges.

Beijing Infrastructure Investment Corp Ltd began civil works for Line 14 in 2010. The line is operated under a 30-year concession by the Beijing MTR Corp Ltd joint venture of MTR Corp (49%), Beijing Capital Group (49%) and Beijing Infrastructure Investment Corp (2%). Under a PPP deal worth 15bn yuan, around 30% of the project's capital cost, the joint venture was responsible for electrical and mechanical systems, and procurement of 63 six-car trainsets supplied by CNR Changchun Rail Vehicles and CSR Sifang. These have Bombardier and New United Group traction equipment.

The joint venture already operates Line 4 in Beijing and the Daxing Line extension. 'This is another major milestone for the corporation's growth in the mainland,' said MTR Corp CEO Jay Walder.

Line 14 is to be extended east and north to Shangezhuang in the Chaoyang district by 2016, when it will serve a total of 37 stations.