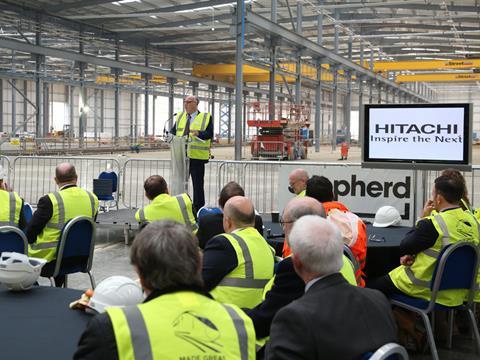 UK: A topping-out ceremony on October 30 marked the completion of the structure for Hitachi Rail Europe’s rolling stock plant at Newton Aycliffe in County Durham. Construction of the £82m factory began in November 2013 and is expected to be completed by mid-2015.

‘Today’s topping-out ceremony signifies a milestone’, said Keith Jordan, Managing Director of Hitachi Rail Europe. ‘This is no longer just a concept - everybody can see for themselves the sheer scale of the site that will act as the hub for our rail manufacturing work in the UK and across Europe’.

During the ceremony, Hitachi Rail Europe announced that it is to base its UK design office at the site. This will initially have 12 staff, of which eight are still to be recruited, and will begin work by developing interior designs for the AT200 electric multiple-units ordered by Abellio for the next ScotRail franchise.

‘With the establishment of our design division, we further enhance professional opportunities and our commitment here in Newton Aycliffe and the northeast of England’, said Jordan. ‘This will be our UK and European rail centre, where we design and build trains for Great Britain and the rest of Europe’.

The factory is being developed at Merchant Place Developments’ Merchant Park industrial site, with Shepherd Construction as lead contractor. Lloyds Somers is to supply an 80 tonne locomotive turntable and a bogie test turntable for the plant, Mechan will deliver two traversers and Capgemini UK is to provide IT support.

‘Merchant Park is benefiting from the upturn in the economy and what is becoming known as “the Hitachi effect” for both Newton Aycliffe and Merchant Park’, said Geoff Hunton, Director of Merchant Anglo (AP) Property Holdings. ‘We have already received a number of new significant manufacturing requirements and we are pleased that we have been able to secure Aycliffe's place on a number of shortlists.’