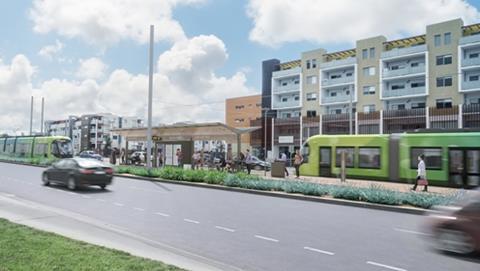 AUSTRALIA: Australian Capital Territory Chief Minister Andrew Barr and Minister for Capital Metro Simon Corbell announced on February 1 that the Canberra Metro consortium has been selected to build and operate the first stage of the planned light rail network.

The consortium comprises Pacific Partnerships, CPB Contractors, John Holland, Mitsubishi Corp, Aberdeen Infrastructure Investments, Deutsche Bahn International and CAF. The final value of the PPP contract value will be confirmed upon signing, but is expected to be within 5% of the consortium’s bid of A$698m.

Stage 1 of the Capital Metro network will run for 12 km from Alinga Street in the city centre to Gungahlin with 13 stops. Services would run at peak frequencies of 6 min. CAF is to supply 14 light rail vehicles, and there would be one depot along the route.

Construction is due to be completed in late 2018, with a view to passenger services starting in early 2019. Canberra Metro will provide 20 years of operations and maintenance.

Barr said that a decision on a proposed extension to Russell will be made this year.