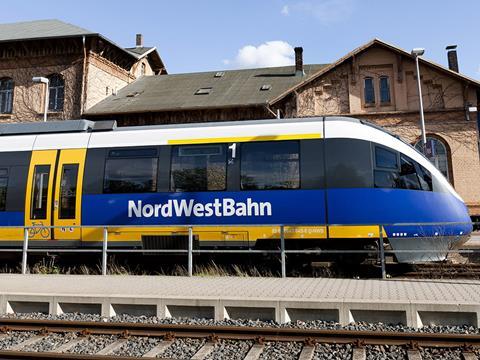 GERMANY: The Rhein-Ruhr and Westfalen-Lippe transport authorities have awarded incumbent NordWestBahn the Emscher-Münsterland-Netz 2021 contract, which covers the operation of service RE14 Essen-Steele – Dorsten – Borken/Coesfeld for seven years from the December 2021 timetable change.

The Transdev subsidiary is to lease Bombardier Transportation Talent diesel multiple-units from Alpha Trains to operate the services.

The transport authorities had originally planned to award a longer-term contract specifying the use of hydrogen fuel cell traction. Following a review, they instead opted for battery power, with the new contract being shorter to cover the interim period while battery trainsets and associated charging infrastructure are procured.

The contract includes the introduction of through services between Coesfeld and Essen, and it is hoped that eliminating the need to change in Dorsten will attract commuter traffic from the roads and thus reduce overall pollution and CO2 emmissions.

‘Since the original plans for how this network was to be operated differed from what they are now, we are particularly pleased to have been able to respond flexibly to the new requirements and to continue our successful partnership with NordWestBahn’, Alpha Trains CEO Shaun Mills said on August 26.